Dweller in the Gulf

Dweller in the Gulf 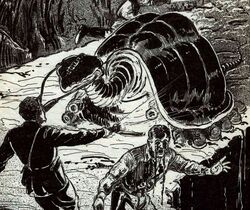 Eidolon of the Blind

Clark Ashton Smith
The "Dweller in the Gulf" is a large, unnamed subterranean beast which lives in the cavernous underground spaces below the vast, lifeless Martian desert known as the Chaur, and is worshiped as a deity by a group of pallid, subterranean Aihai-type Martians. It's not known whether it represents a species or a unique being (possibly one of the Great Old Ones).

Its body is covered by a smooth lustrous white carapace that gives it an appearance similar to a glyptodon or tortoise, walking on over a dozen short legs with round suction-cup feet that allow it to cling to vertical surfaces, and dragging behind two long tails. Its head is flat and triangular, and from the corners of its wide mouth protrude two tubular proposcides, upward-curving and ending in cup-like suckers which are used to feed on the eyes of its victims. The Dweller itself, unsurprisingly for a subterranean beast, is blind and eyeless. It moves around with incredible swiftness and speed, and can even stand erect on its hindmost legs, its weight balanced by the long tails.

The exact relationship between the subterranean sect of Aihais and the Dweller is not clear, except that the Aihais worship it and willingly sacrifice their eyes to feed it. It's possible that the relationship might be symbiotic in nature, as the Aihais wouldn't need their eyes anyway, living in a perpetually dark world, and might offer them to the Dweller in exchange for protection.