Dweller in the Depths

Dweller in the Depths 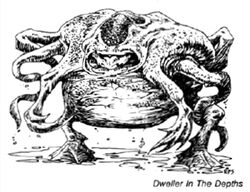 Ramsey Campbell
The Dwellers in the Depths are a sapient race of amphibious extraterrestrial creatures and servants of the Great Old Ones.

As indicated by their moniker, the Dwellers in the Depths are an aquatic race, although they can also operate on land. Their bodies are elliptical, and possess eight limbs; six of which end in webbed flippers while the other two end in tentacles. Of the six webbed limbs, four are located on the lower part of the body and used for walking, while the other two are closer to the creature's head, which joins directly to the body.

The Dwellers in the Depths are eyeless. Instead of eyes, they possess a green sponge-like organ, covered in some substance similar to spider web. The mouth, located directly below this strange organ, is wide and slit-like. From each side of the mouth protrudes a small curved tentacle, which serves to manipulate food. Inside the mouth there are no teeth, but six rows of interlaced tentacles close to the creature's throat.

Their flesh, gelatinous-looking and partially translucent, is very resistant to physical injuries, although they can still be killed by bullets, provided that the central part of their bodies is perforated. They're parthenogenic, and capable of fast breeding.