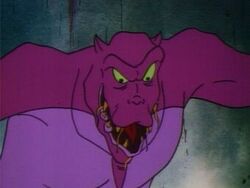 Star Wars
A Durkii is a giant, non-sapient reptilian biped found on the planet Tammuz-an, in a galaxy far, far away.

They are large, purple-skinned bipedal reptilianoids with a long tail and sharp claws on their hands and feet. They're known to be infected by a relatively-small species of parasites known as Kleex, which seem to be largely responsible for the Durkii's hostile behaviour. Removing the Kleex will soothe the Durkii, making it far more docile.

Retrieved from "https://aliens.fandom.com/wiki/Durkii?oldid=200857"
Community content is available under CC-BY-SA unless otherwise noted.