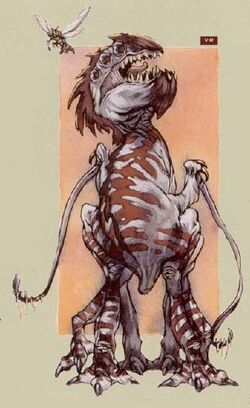 Star Wars
The Durgolosk are large, predatory creatures native to Barab I. They have five inch long teeth, two whip-like tentacles tipped with paralyzing razor-sharp barbs, and an incredible range of vision thanks to their six eyes that also provide them with excellent night-vision. They utilize good camouflage and a keen sense of smell, making them the apex predator of their homeworld. Perhaps luckily for their prey, they sleep far more often than they hunt.

The durgolosk was a non-sapient, predatory species native to the swamp world Barab I. Huge in size, the creatures had six three-clawed legs located beneath their body and a pair of arms attached above the legs. A durgolosk had short, clawed arms with thin tentacles protruding from the ends, and the tentacles had paralyzing venom at the tips. Durgolosks could rotate their torsos almost a full 360 degrees, and their bodies were covered in pale-white hide with brown stripes. Their heads featured a large, brown crest on the back above six black eyes, which were spaced radially, and jaws full of teeth ten to fifteen centimeters long. Durgolosks possessed good vision in both light and dark environments and had a keen sense of smell.

Durgolosks spent most of their time sleeping, but while hunting, a durgolosk attempted to consume any animal it came across. Durgolosks were not territorial, roaming across their homeworld during the nighttime, and they hid in crevasses during the intense heat of Barab I's daylight hours.