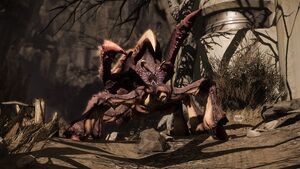 Evolve universe
Dune Beetles are a carnivorous, arachnid-like creature native to Shear's arid desert climates. It is both an active hunter and scavenger, often found alone. It is a very quick hunter, and is capable of catching fast moving prey. Similar to other medium-sized carnivores, the Dune Beetle is also hunted down by larger competition. However, it's not an aggressive creature, and will not fight against larger carnivores for food. It also scavenges on pre-made kills - an advantage for living in a habitat with very limited resources.
Retrieved from "https://aliens.fandom.com/wiki/Dune_Beetle?oldid=171463"
Community content is available under CC-BY-SA unless otherwise noted.