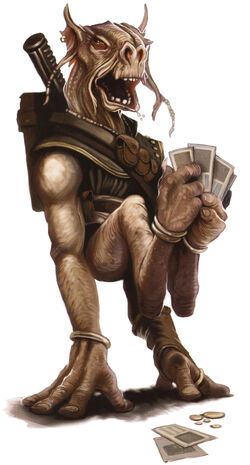 Star Wars
Dugs are an aggressive mammalian species native to the planet Malastare that use their upper limbs as legs and their lower limbs as arms.

Dugs are slender, powerfully built beings with a somewhat humanoid build and a unique method of walking that hails from the high gravity world Striar III. Their primary means of locomotion are their strong arms, and their lower limbs and feet are used for grappling and other fine motor manipulation. They hardly ever walk on their lower limbs. Although most Dugs may walk on all four limbs, others like to use their strong arms as legs and their feet as hands like they would normally do.

Dugs have smooth skin, which hangs loosely around their tall necks, only to inflate during mating season calls. They also posses fin-like ears and pronounced snouts. They live mainly in the forests of the western continent of their homeworld in primitive tree villages called "tree thorps". On their homeworld Striar III, the Dugs are arboreal beings. They brachiate among the canopies with alarming speed, using all four limbs.

Originally a prey species, the Dug were hunted by a semi-sapient species known as the Zillo Beasts. However the Dug managed to gain the upper hand by wiping the predators by destroying their habitats.

Due to their oppression under their Kinyenian rulers who colonized Striar III, many Dugs often feel the need to throw around their strength in bids to establish dominance. As a result, they're known for their ill-tempered demeanor, and many are bullying thugs.

On their homeworld of Striar III, the vast majority of Dugs are little more than laborers toiling for the enrichment of the Kinyenians. With the species excluded from much of the power and money on Striar III, many Dugs, such as Sebulba, turned to podracing as their only means to achieve fame and fortune. In all other areas, the Dugs are exploited and disenfranchised.

Dug mating is very reminiscent of some reptiles, which may indicate their ancestry. The loose folds of skin around the males neck will inflate during the mating season, showing a display of color. An interested female may pester or disturb a male in a few different ways until his balloon-neck deflates with a screech. After this, the two are considered mated. Mates remain loyal to each other, even though they may bully each other through their time together.

Because of their experiences with the Kinyenians, the Dugs are xenophobic and rarely leave their homeworld. If they are seen off-planet, they are often seen in groups of their own kind (and because of their reputation, they're usually left alone). Most Dugs in the galaxy are criminals or risk-takers, leading many Dugs into podracing and gambling.