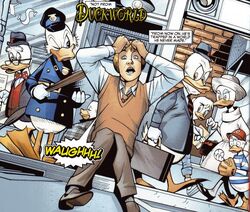 Marvel
The Duckworldians are a species of anthropomorphic ducks from a planet called "Duckworld", located in an alternate universe where ducks are the dominate species. Despite being feathered, they are strangely flightless. Their universe was originally known as "Earth-47920", but was then renamed "Earth-791021".

They are anthropomorphic ducks with white feathers, and orange beaks and legs. For whatever reason, they are unable to fly.

Retrieved from "https://aliens.fandom.com/wiki/Duckworldian?oldid=188212"
Community content is available under CC-BY-SA unless otherwise noted.