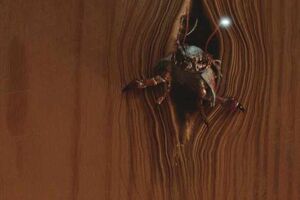 Doctor Who
Dryads, or "Lice", are a race of insectoid aliens that are able to control wood on a molecular level.

The Dryads resemble large woodlice with glowing antenna and a brown/black rollie-pollie like abdomen.

The Dryads have the ability to travel through wood at a molecular level (possibly due to their antennae), and can control wood at will by acting as a somewhat nervous system. They're carnivorous so any prey they wish to eat, they have their prey be molecularly fused with the wood they reside in and eat from there. They also have the ability to progressively heal people from diseases at will. The only way to control them is to use high frequency sounds or to have been progressively healed by the lice (which results is the subject's physical appearance becoming more wooden as time goes on).

Based on what the Doctor says about the Dryads in the episode "Knock Knock", they could have possibly been the cause of many beliefs of living, carnivorous trees across the galaxy and could be living on various planets other than Earth.

Retrieved from "https://aliens.fandom.com/wiki/Dryad_(Doctor_Who)?oldid=173806"
Community content is available under CC-BY-SA unless otherwise noted.