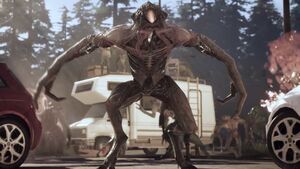 The Drones are the more common Alien species of the horde appearing on Earth since 2031's Meteor Strike on the planet.

Drones are vaguely simian-like alien creatures commonly found in large groups called swarms. They have a large singular eye on their heads, and their mouth is opened with tons of sharp teeth and four tentacles bordering its jaws. Normal Drones have pinkish pale skin.

Two other variants are known to exist.

The Spitter Drones are known to shoot out acid projectiles at their targets.

Drones are never found alone. Relatively weaker than most other Aliens of the horde, Drones will swarm their prey in large numbers to subdue and overpower it.

Retrieved from "https://aliens.fandom.com/wiki/Drone_(Earthfall)?oldid=170629"
Community content is available under CC-BY-SA unless otherwise noted.