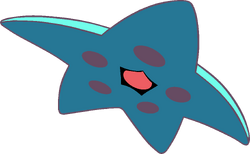 The "Drill Parasites" are parasitic creatures that were produced by a corrupted Gem Cave Creature.

When furled, the Drill Parasites resemble small, light blue drills; when unfurled, they resemble light blue starfish with a singular eye that is surrounded by five pink markings.

The Drill Parasites possess enhanced strength and durability, and are able to duplicate themselves upon drilling into the ground.

A furled Drill Parasite
Add a photo to this gallery

Retrieved from "https://aliens.fandom.com/wiki/Drill_Parasite?oldid=184898"
Community content is available under CC-BY-SA unless otherwise noted.