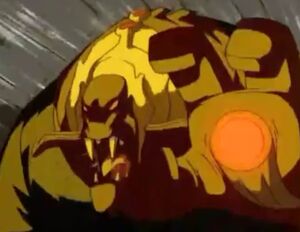 Drekk is a ruthless alien criminal belonging to an unknown species, and a recurring enemy of the Men in Black. The most notable trait of his biology is his hands, which can generate extraordinary amounts of heat and allow him to fire out flames and melt concrete and metal just by holding it. Although he can produce fire voluntarily, the heat itself seems to be automatic, and has caused problems for him in more than one occasion (e.g. melting a metal handle that he was holding onto, causing him to fall). He is an extremely vengeful individual, obsessed with hunting down those who have caused trouble for him.

Retrieved from "https://aliens.fandom.com/wiki/Drekk?oldid=180389"
Community content is available under CC-BY-SA unless otherwise noted.