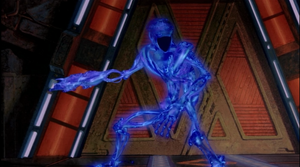 The Drej are a race of aliens from the 2000 film Titan A.E., in which they serve as the main antagonists. Afraid of the dominance humankind may gain as a result of Project Titan (an extremely advanced planet formation project), they set out to destroy, and additionally to devour the lifeforce and energies of Earth and the human race so that they can reproduce, as seen in the Titan A.E. Dark Horse comics.

The Drej are arthropods made entirely out of pure energy, giving them a bright blue glow. At the front of their heads is what appears to be an eyespot, which, according to the novelisation, also houses a mouth, the latter of which is not seen in the film. Despite their physiology, however, they are tangible and can manipulate objects just as easily as other sapient races. Furthermore, when a limb is destroyed they can regenerate it in a matter of seconds, possibly by extracting energy from their surrounding environment. Drej can fire portions of their substance at foes in a concentrated blast, although whether or not this expenditure of energy subsequently weakens their physical form is not explained.

Like the Drej themselves, their technology is also made of pure energy. In at least one known instance, non-Drej beings have been able to escape captivity and move through Drej ships by putting two objects (i.e., Hands) against surfaces and then bringing them together, interrupting the energy flow and allowing passage.

Retrieved from "https://aliens.fandom.com/wiki/Drej?oldid=202079"
Community content is available under CC-BY-SA unless otherwise noted.