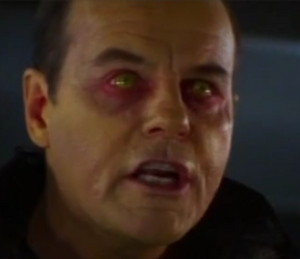 The Dregocians, derogatorily called Dregs by Humans, are a race of genetically-engineered humans.

The Dregocians resemble yellow-skinned humans though with several enhancements. They have yellow eyes designed to reflect the harsh light of their adopted homeworld and a third lung to tolerate the thin atmosphere.

According to the Halsey Study, it was reported that Dregocians tend to develop leadership abilities despite having it bred out of their species.

Several centuries in the future, humanity created a genetically-engineered race to be slaves. Humanity used them to terraform planets and mine trion ore to sustain Earth.

The Dregocians eventually rebelled and established their own civilization on Dregocia. However, they fought a war against the United Coalition for autonomy.

After centuries of fighting and acts of terrorism on both sides, the United Coalition and the Dregocian High Command agreed to meet at a neutral location to negotiate a peace treaty. The Dregocian delegation was mysteriously shoot down over the neutral planet, leaving only two survivors. Despite mounting distrust, the peace talks continued. During the negotiations Earth was now ready to give the Dregocians their autonomy and human rights deprived of them for centuries.

Negotiations merely broke out when a human traitor attempted to sabotage the talks. However, the surviving Dregocians were killed. With the Dregocians and Earth fleets posed to attack, the remaining Earth delegates committed suicide to appease the the Dregocian High Command to preserve the peace.

Formerly a slave race, the Dregocians believe that they had justification in rebelling against their Earth masters and creating their own society. Very little is shown of Dregocian culture, but they do seem to be militaristic, adhering to Dregocian High Command.

Retrieved from "https://aliens.fandom.com/wiki/Dregocian?oldid=135029"
Community content is available under CC-BY-SA unless otherwise noted.