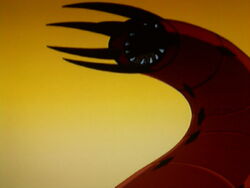 Ben 10
Dravek are a non-sapient worm-like extraterrestrial species native to the planet Turrawuste.

Dravek are massive, worm-like creatures with red skin and a mouth filled with sharp teeth.

Dravek are able to burrow underground rapidly, an ability which they use to more easily catch prey.

Ben Tennyson and the Highbreed Reinrassic III were trapped on Turrawuste after a teleporter ring malfunctioned, and the two formed an uneasy alliance in order to get off the planet. The pair were attacked by a Dravek, but managed to defeat it and sent it back down underground.