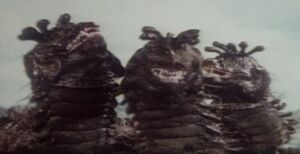 Native to a galaxy other than the Milky Way, the Drashigs are a species of vicious predatory beasts. They somewhat resemble huge elongated gastropods, and usually locate prey by scent. They are extreme omnivores, although showing a preference for flesh.

One famous story tells of a spaceship which crashed into the Drashig homeworld: by the time rescue arrived not only had the whole crew been devoured by the creatures, but most of the vessel itself as well, with only a few metal scrapes left behind.

Drashigs are enormous worm-like predators with a reptilian mouth filled with teeth. They also have three pairs of short eyestalks, two types of teeth like a mammal, and primitive quills and thick bony armor across their bodies. They normally inhabit marshlands and seem to be able to move just as well on the surface, underground or underwater. They are strong enough to burst through a metallic hull and their hide can deflect bullets from a machine gun.

Drashigs are social creatures, which live in groups of about twenty and, despite their large size, frequently hunt in trios. That they feel the need to hunt in groups likely indicates that they aren't the largest species in their native habitat. They are armed with huge nostrils, to follow the game trails of prey, and their six eyes allow them to see all around, even behind their own heads. Because the eyes are on stalks, they can submerge themselves with just small eyes poking out, allowing them to launch surprise attacks on prey.

Retrieved from "https://aliens.fandom.com/wiki/Drashig?oldid=180164"
Community content is available under CC-BY-SA unless otherwise noted.