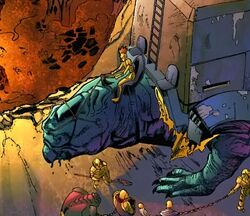 Marvel
The Drammoth (Kimodus burdonus) is a creature native to Sakaar's mountain ranges, both the Mawkaw, and the Maga. The gigantic drammoths are specially adapted for life in high elevations. The largest known lizard species native to Sakaar the drammoths possess a lung capacity several times larger than that of other reptilian species, and their scaly hide is thick enough to protect them from the most frigid temperatures of the elevations.

In the wild, drammoths live in mixed herds of about 30-35 and feed on eggs, small mammals, and carrion. Female drammoths lay about six eggs per year, and the young are quickly assimilated into the herd upon hatching.

Although it is not known with certainty when the drammoths were first domesticated by the Natives and the Imperials, today domesticated drammoths vastly outnumber their wild brethren. Natives use the docile drammoths as beasts of burden to plow their fields. The imperials have taken advantage of the drammoths' affinity for high elevations, breeding them for traction and using them as massive, lumbering space transports. Drammoths are most often used to transport gladiators to and from the maw.