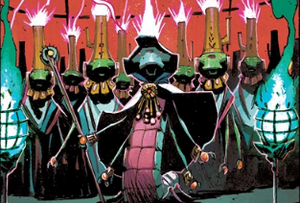 Dralns are a millipede species from a dimension in the Eververse of the Black Science Universe.

The High Prophet Blokk had visions of his counterparts existing in the Eververse. Unable to divine why he was given a worthless existence while he toiled in suffering he came with the belief that life was a mistake and death was the only course. He gained a following among his kind, who believed his nihilistic views. When the Dimensionauts arrived Blokk managed to steal a portable Pillar. Using the technology he led his armies across reality on a genocidal path seeking to destroy all life and reach the Anti-God at the center of the Neververse.

The Dralns are green chitlin covered Huang millipedes possessing six eyes, and six limbs. They possess powerful telepathic abilities allowing to communicate with others. In addition they are afforded great mind controlling powers though a few species from their home dimension are immune. A few are capable of having vision that reach out across the Eververse.

The Dralns are race that are no strangers to suffering. Having been used as livestock and slaves by the species of their home dimension they hold a very nihilistic view of the universe. After learning of the existence of the Eververse and myriad realities, where their counterparts existed doing every thing that could ever be done. They questioned what was there purpose and they came to the belief that Life was pointless. Free will was an illusion and the only was to liberate themselves was to destroy everything. They believe that it’s their sacred mission to kill all life in the multiverse to free these species of suffering and existential crisis.

Retrieved from "https://aliens.fandom.com/wiki/Draln?oldid=182092"
Community content is available under CC-BY-SA unless otherwise noted.