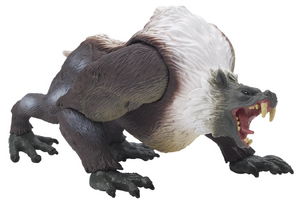 Similar to an Earth bear in size

Drakoulias are large bear-like mammalianoid predators native to the ice planet Delta Vega, in the Vulcan System. They have four paws, with the front pair being much more well developed, even giving them some resemblance to Earth's Gorillas. Each paw has four digits which end on deadly claws. The Drakoulias head is similar to that of a bat, but with a slightly longer snout and enormous canine teeth.

Retrieved from "https://aliens.fandom.com/wiki/Drakoulias?oldid=180722"
Community content is available under CC-BY-SA unless otherwise noted.