Dragon Bolt was a carnivorous dragon-like beast which appeared in the Hero Factory universe .

Dragon Bolt was a most mysterious monster that happened to resemble the extinct dinosaur, due to its appearance . It also formerly lives in a jungle planet which was located in the universe .

However during the invasion of the Brains, a brain parasite suddenly brainwashed Dragon Bolt and mutated it into a terrifying monster . So, it led the other creatures who are under the control of the brain-like aliens to attack Hero Factory .

Dragon Bolt was in fact a peaceful and benevolent beast which can only attack those who threatened its life . Because of its aggressive temper and  frightening powers, Dragon Bolt was also known to take down even its larger enemies .

Dragon Bolt was a carnivore . It fed on other creatures like lizards, birds, fishes and other animals as well .

When fitted with a most powerful Brain, Dragon Bolt was transformed into a deadly beast that control electrical powers that coursed in its body .

Dragon Bolt in toy form
Add a photo to this gallery 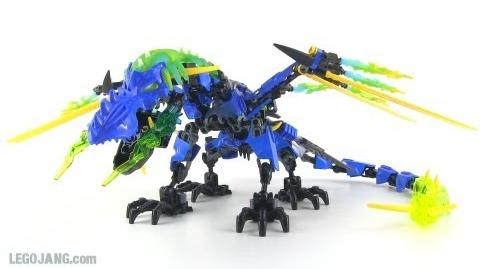 Retrieved from "https://aliens.fandom.com/wiki/Dragon_Bolt?oldid=181748"
Community content is available under CC-BY-SA unless otherwise noted.