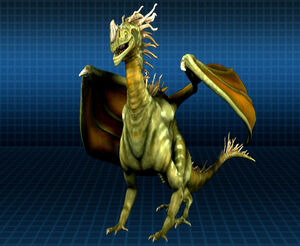 The crossings of these large and powerful monsters from the monster world to the human world was commom in Medieval times, but rare in modern times. Their scales are rumoured to cause bad luck and glow and heat up as they get nearer to a portal between the two worlds. A baby Dragon also matures in a matter of hours once every 10,052 years, and when a Dragon crosses to the human realm, the portal it came through will remain open until the Dragon returns through.

Although Dragons roamed the earth in earlier days, Troops have been able to keep them in their own world in modern times. They are noble, majestic beasts and have long been protected by the Troop when they do cross over into our world.

Retrieved from "https://aliens.fandom.com/wiki/Dragon_(The_Troop)?oldid=178185"
Community content is available under CC-BY-SA unless otherwise noted.