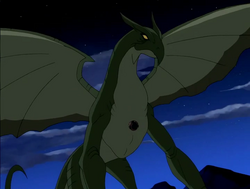 Ben 10
Dragons are a race of aliens that are often confused with Dragons of mythical lore.[1]

Dragons have extremely long lifespans and a slow development. According to the Dragon Ben Tennyson met, his baby probably learned to fly while he was imprisoned on Earth for over 1,000 years.

Dragons possess great strength, and are capable of shooting a fiery energy beam from their mouths.

With their wings, Dragons can fly as fast as an airplane.

Dragon are resistant to most damage, as no weapon from Earth or beyond has been enough to kill the one who was imprisoned by the Forever Knights for over thousands of years.

Dragons can move in both bipedal and quadrupedal fashion, all with great agility and dexterity.

Dragons can be imprisoned in dungeons underneath large stone fortresses for over 1,000 years before they can break free.

Retrieved from "https://aliens.fandom.com/wiki/Dragon_(Ben_10)?oldid=189053"
Community content is available under CC-BY-SA unless otherwise noted.