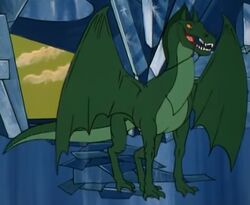 Blackstar
The Dragon-Horse is a non-sapient species found on the planet Sagar; located in an alternate universe.

When Human astronaut John Blackstar was stranded on the planet, a Dragon-Horse named Warlock became his flying steed as well as his loyal companion.

Like their name indicates, Dragon-Horses are equine-looking, horse-sized dragon-like creatures with green reptilian skin and membranous wings. They have tridactyl feet with strong claws, a long reptilian tail, and sharp teeth. They can also breathe fire.

This species looks practically identical to the Takdryl from planet Eternia; the only difference being that the latter are red rather than green.