Alien Species
Register
Don't have an account?
Sign In
Advertisement
in: Enemy Mine Universe, Sapient Species, Humanoids,
and 15 more 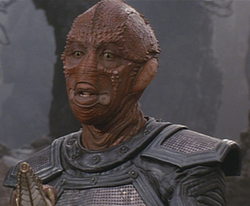 Enemy Mine
Dracs are a reptilian humanoid race from planet Dracon which fought a war against Humans in the late 21st century.

These beings are excellent swimmers, having evolved on a planet that was largely made up of water. They have scaly skin, three large-clawed fingers on each hand and are hermaphrodites, reproducing asexually.

For a Drac, giving birth to an offspring is not a choice; they all do it spontaneously at some point of their life. When it comes the time for the young Drac to be accepted in the society, their parent must sing their entire family ancestry line in the presence of the Holy Council of Dracon.

The Drac believe that everything exists as an all living spirit. This Spirit directs the creature and his actions and deeds. The spirit of a living being determined, whether it is good or evil. The Drac also believe that the mind has an inner strength that is until his creatures dies.

Most Drac seem to follow the teachings of Shiuzmaat, an ancient Drac prophet, which are written in a small book called Talman.

Among the teachings of Shiuzmaat includes the idea of "Truth is truth".

The Holy Council on Dracon is the dominant governmental force for the Drac race. The Drac Empire seems to lack a separation of church and state, giving the impression that the government is dominated by a theocratic apparatus very similar to the Roman Catholic Church. Though it is not known what the term would be used for the head of the Holy Council.

The Drac have a high technical understanding.

Shigan tells his human compatriot Davidge that they have colonized the galaxy at least one-thousand years before humanity.

Their spaceships have a flat, plate-like shape and are equipped with a powerful drive.