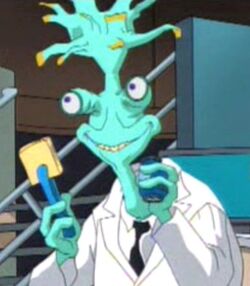 Men in Black
Dr. Zan'dozz Zeeltor is an alien of unknown species regarded as a scientific genius, with a reputation that spans multiple galaxies.

Zeeltor is a brilliant but eccentric man who has no problem with operating on people without their consent or knowledge. He is usually in a friendly disposition and is very helpful. He has a pet bacterium called Lucy, that he keeps on a petri dish.

Zeeltor immigrated to Earth and became chief scientific officer of the Men in Black organization in New York, replacing Agent L after she was promoted to field agent. His job primarily involves analyzing alien substances and doing forensics, but he's also known for creating several gadgets for field agents to use.

Retrieved from "https://aliens.fandom.com/wiki/Dr._Zan%27dozz_Zeeltor?oldid=180452"
Community content is available under CC-BY-SA unless otherwise noted.