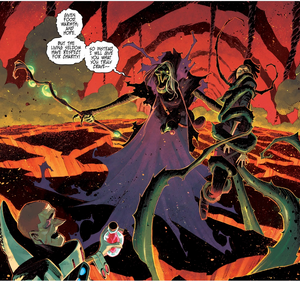 Doxta the Cursed Witch of the Withering Woods was a powerful practitioner of magic that lived on the world of Tarna in the Black Science Universe.

Doxta was once a lover of the king of the Balance Clan. The two wedded and married, however their bond broke after the king discovered that she had lied to him and was mortal seeing that she aged. Doxta was betrayed and scorned away. Since then she sought only revenge over the king for his broken oath.

Doxta would become a feared being on Tarna, making the Withering Woods her home. She was a threat that the gods of the Three Families refused to provoke as none of their bravest warriors ever returned from the accursed forest. She acquired many artifacts through her barters, which were mostly gained through trickery and duress.

When Grant McKat destroyed the Omnimid he sought the Oxenheart of Romador that was in her possession. Upon reaching the depths of the forest he encountered Doxta disguised as an dumpy old lady who welcomed him into her home. Pia Grant, his daughter followed him to make him cease this foolishness and just to accept that she wanted him out of her life. Grant spied the Oxenheart on the mantle and realized they were in the den of the witch.

Doxta revealed her true form, taking Pia hostage and forcing Grant to trade his intellect for his daughter and the heart. Through Grant's mind Doxta gained the knowledge of Black Science and the ability to cross the Eververse. She left the humans claiming that the Great Barter was at hand, thanking them for the gift and ending the wars of the clans.

During her travels through the multiverse, she encountered Sensational Genius XI of the Legion of Ethical Champions diving deep within the depths of the Neververse. She incapacitated him stealing the Jatorakk Crystal assuming his form and infiltrating New Heaven. There she present the crystal to Atomic Fury the dimension's greatest hero and Pia Grant's brother Nathan Grant's mentor. Atomic Fury needed the crystal to open windows throughout the multiverse to prevent a plague of Zirites fro infesting all the sentient life throughout existence. However Atomic Fury casually stated that he would give his strength, Doxta took her momemnt and stole his powers. After killing several of the Legion she forced a deal with the remaining heroes, the Crystal that she brought for the strength of Atomic Fury. Pia Grant in the scuffle managed to reclaimed her father's genius absorbing it into her brain. The bargain they heroes made with the Witch is ambiguous though they managed to take back Atomic Fury;s power and make it to the prime dimension of Nathan and Pia, saving it and countless world from the Zirites.

As reality began to merge on the world, the Dralyns continued their genocidal assault. The heroes were outnumbered by the psychic aliens until Pia brought reinforcements from Tarana. The Witch seized her moment to easily capture the gods and their allies with vines. She gloated that the Great Barter led to this and how she orchestrated with a higher power to allow her to seek revenge on the king who scorned her.

Doxta was a powerful witch that gods feared. Though initially a mortal, Doxta gained various powers from her deals. Doxta's powers include shapeshifting, power stealing, and mind-reading. She was capable using her magic to traverse the Eververse.

In addition despite not possessing longevity like the gods of Tarana she was impervious to death as any fatal harm on her she would just regenerate or reform.

She takes oaths very seriously, remembering her own broken oath by her lover. Doxta will always hold her terms of the agreement and expects the other party to honor it. That being said she is more than capable of using deceit znd coercion to make deals with unsuspecting traders in order to steal their gifts. By doing this she ensures that her 'fair bargain' is more in her favor.

Retrieved from "https://aliens.fandom.com/wiki/Doxta?oldid=137701"
Community content is available under CC-BY-SA unless otherwise noted.