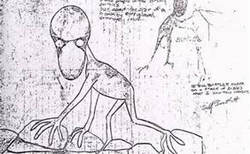 The Dover Demon is a mysterious creature famously sighted by at least three witnesses over the nights of April 21 and 22, 1977, in the city of Dover, Massachusetts.

The Dover Demon is a quasi-humanoid being, about 4 ft. in height, and seems to be a facultative biped. It has orange skin, thin limbs, tendril-like digits, an ovoid head and a pair of large glowing eyes. It was sighted on top of a stone wall, proving that it can climb; and possesses no tail, thus ruling out most species of local animals as possible candidates for its identity.

Due to its strange appearance, many people have speculated on a possible extraterrestrial origin for the Dover Demon, even though there have been no UFO sightings associated with it. In reality, the Dover Demon closely resembles a race of small humanoids from Cree folklore known as the Mannegishi, and is very likely to represent the same species.

Retrieved from "https://aliens.fandom.com/wiki/Dover_Demon?oldid=181316"
Community content is available under CC-BY-SA unless otherwise noted.