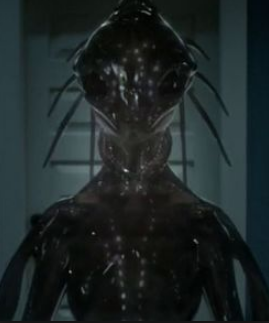 The Dornia were a sapient species from a distant galaxy in Falling Skies.

The Dornia were a six legged species with translucent skin.

The Dornia were the first species that were enslaved by the Espheni centuries ago. Their race was the genetic template to used by the Espheni to create the Skitters. The Dornia fought the Espheni in a war that stretch between two galaxies and were rightly feared by their enemies.

The war with their mortal enemies took its toll on the species, leaving only one survivor. This survivor sought out Tom Mason to destroy the Espheni for good and avenge its species. It gifted him a biological wepaon that would infect the Espheni Queen and destroy her children and their threat over all races.

Retrieved from "https://aliens.fandom.com/wiki/Dornia?oldid=178183"
Community content is available under CC-BY-SA unless otherwise noted.