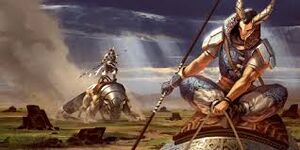 Banished after a series of feuds, these Roving Clan families left the life of their caravans and cities, exchanging the luxuries of merchants for the hardships of warriors.

The Clans secrets of beast control were used to master the great Burdemek lizards, turning the Dorgeshi into a fearsome heavy cavalry.

Retrieved from "https://aliens.fandom.com/wiki/Dorgeshi?oldid=164621"
Community content is available under CC-BY-SA unless otherwise noted.