Not to be confused with Dorkons 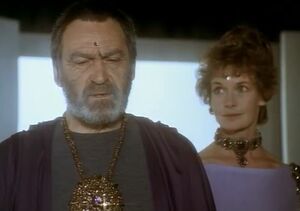 The Dorcons are a spacefaring species of hostile humanoids, and the arch-enemies of the Psychons. They've been described as the most powerful race in the galaxy.

Physically, they look indistinguishable from Humans, save for a small crystalline jewel on their foreheads. It's not known whether this is a natural feature or something simply worn by them.

In terms of physiology, it's been claimed that Dorcons don't die the same way as other species. The only part of their bodies that is not biologically immortal is their brain stems, which cease to function with age, thus killing them.

Dorcons are an extraordinary powerful people who control an interstellar empire spanning thousands of inhabited worlds, all ruled by a single monarch that hold the hereditary title of Imperial Archon.

Their technology includes mind probes that can have devastating effects in the minds of Psychons and prevent them from using their shape-shifting abilities. The Dorcons also dominate means of transmuting matter to energy, and use it to materialize and dematerialize their ships instantly to another location.

For centuries, Dorcons have systematically hunt down members of the Psychon species; the reason for this being that the Dorcon's main physiological weakness: their brain stems; isn't shared by the Psychons. Instead, Psychon brain stems can potentially last forever. Therefore, implanting a Psychon brain stem into a Dorcon could theoretically make the Dorcon immortal.

Retrieved from "https://aliens.fandom.com/wiki/Dorcon?oldid=181946"
Community content is available under CC-BY-SA unless otherwise noted.