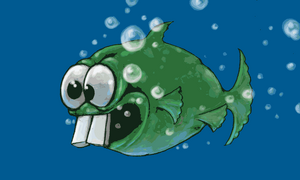 Dopefish are large, green scaled, buck-toothed ichthyoids that are believed to be the second-dumbest creature in the universe, runner up to the Ravenous Bugblatter Beast of Traal. They have very low brain function, with thought patterns that reportedly only go: "swim, swim, hungry, swim, swim, hungry". They are tremendously opportunistic, and will eat anything that moves, but apparently favor a diet of heroes, such as Commander Keen.

Retrieved from "https://aliens.fandom.com/wiki/Dopefish?oldid=179561"
Community content is available under CC-BY-SA unless otherwise noted.