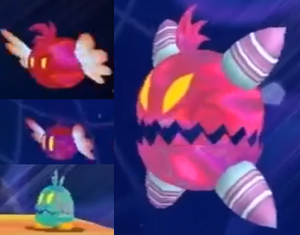 Energy Spheres or some similar source of nourishment

A Doomer is a strange bioluminescent species found in Another Dimension.

Doomers are found in Another Dimension. They are all and have yellow eyes. They might feast on Energy Spheres like the Sphere Doomers, or they could have a similar source of nourishment. There are several variants of Doomers, including the Sphere Doomers, and the Grand Doomer.

Purple Doomers are small and have two purple-tinted wings. They lack the tufts of hair or the tail feathers of the Sphere Doomers. Their eyes are also all the way open as if in fear, as opposed to the angry arches of the others. They lack much of the offensive capability of the other Doomers and can only fly into opponents. They don't actively seek out flying into opponents either, but can occasionally change flight patterns after appearing. They usually appear in large groups. They are taken down by a single shot from Landia.

Red Doomers have red tinted wings and 3 tufts of hair. They have angry eyes. They can fly into opponents or open their mouth and spit orbs at foes. These orbs can be destroyed by Landia. These Doomers only take a couple shots to destroy.

Green Doomers are the only land based Doomers. They have two tan feet to cling to the surfaces of Another Dimension. They also have the three tufts of hair and an open mouth. They spit orbs at opponents which can be easily destroyed. They are also taken down with only a couple shots from Landia.

Pink Doomers are the largest of the normal Doomers, coming close in size to that of the Grand Doomer. They have four spikes, a large gaping mouth, but no wings. They spit large orbs at opponents, but the orbs are easily destroyed. However, the Pink Doomers can take a large amount of shots, so using charged shots is recommended. They also launch four spikes upon defeat, but they can either be dodged, or destroyed with more shots from Landia.

Retrieved from "https://aliens.fandom.com/wiki/Doomer?oldid=181743"
Community content is available under CC-BY-SA unless otherwise noted.