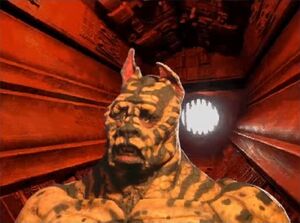 The Doog are a species of extremely loyal and naïve dog-lizards. Described as dull-witted by gamerevolution.com,[7] they lack the intelligence to understand that no matter how hard they worked, they could never make enough money to buy themselves out of their K'Tang and Ploxis owned financial slavery. They are known to have 6 colony worlds by the time of the Captain's arrival in the Kessari Quadrant: Adapa 1, Cerberus 2, Chloris 1, Izanami 2, Melpomene 4, Proserpina 1.

Retrieved from "https://aliens.fandom.com/wiki/Doog?oldid=186708"
Community content is available under CC-BY-SA unless otherwise noted.