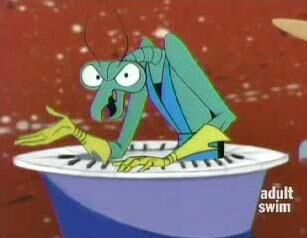 These aliens are often described as looking similar to a giant praying mantis. They stand considerably taller than the average Human, considering their noticeably "hunchbacked" posture. They have skinny bodies, light or dark bluish-green skin, and heads supported by long necks, a pair of wings, and large eyes that do not appear to be composed (which is common for insectoids).

The Dokarians' leader is a wholly different creature with a large head, a shorter stature, a non-beaked mouth and pupil-less black eyes. Despite this, he was dressed in a Dokarian uniform like the others.

They have impressing regenerating abilities and are able to hypnotize others, though this might not hold true for all members of the race.

The fact that they sought to conquer an oceanic settlement might indicate that the species can survive underwater.

Despite possessing a set of wings, it remains uncertain whether they are able to fly.

They appear to be able to consume highly unusual substances, including toner fluid.

The Dokarian mating process results in the death of the male, as is the case for Earth mantises.

Dokarians go through molting processes, confirming that they have exoskeletons.

Hardly anything is known about their culture and civilization, since the most famous member of this species, the villain Zorak and his assistants, are actually renegades who left their planet to attempt to conquer the galaxy.

In the year 2076, a Dokarian vessel attempted to conquer an underwater Human civilization on Earth, but their plans were thwarted by Jabberjaw and the Neptunes (a group of four musicians). It seems unlikely that the very small group of invaders was acting in the interests of the Dokarian government.

As seen in Jabberjaw

Retrieved from "https://aliens.fandom.com/wiki/Dokarian?oldid=196787"
Community content is available under CC-BY-SA unless otherwise noted.