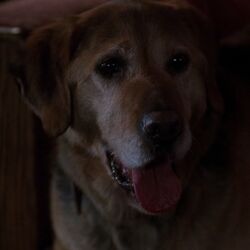 Real
Dogs (Canis lupus familiaris) are a common species of domesticated animals found on Earth, most often as the companions of Humans as it was humanity that domesticated them. They are considered a subspecies of the grey wolf (Canis lupus).

Retrieved from "https://aliens.fandom.com/wiki/Dog?oldid=197109"
Community content is available under CC-BY-SA unless otherwise noted.