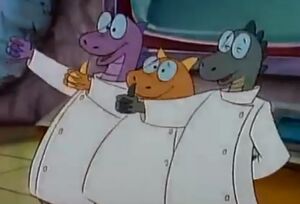 Unknown planet in a galaxy far away

The Dinosaurs are an extraterrestrial society which consists of several related races of small, sapient, reptilian beings; all hailing from the same unnamed planet in a distant galaxy.

Millions of years ago, the Dinosaurs sent fleets of colonists to settle on the recently-discovered planet Earth, having found that it has the same environmental conditions as their world. Unbeknownst to them, however, consuming Earth food resulted in them growing in size immensely and losing all their intellect, which eventually led to the colonists losing contact with their homeworld and becoming extinct.

The Dinosaurs which remained behind on their home planet weren't aware of what had happened to their Earth brethren until millions of years later, when a lone explorer nicknamed Steggy visited the planet and found out.

On their native world, Dinosaurs are mouse-sized creatures. They can alternate between bipedal and quadrupedal stance with no problem. Their environmental requirements are the same as those of earthlings, and they seem to have the curious ability to learn new languages quickly, just from reading comic books.

The Dinosaur civilization is a peaceful and prosperous one. It's been stated that there's been no war on their planet for thousands of years, due to their culture of being content with what one has. Meanwhile, their pursuit of arts and knowledge enriches their lives and has allowed them to develop a space program and study other planets with living conditions similar to their own, to attempt colonization.

Retrieved from "https://aliens.fandom.com/wiki/Dinosaur_(Chip_%27n_Dale:_Rescue_Rangers)?oldid=182245"
Community content is available under CC-BY-SA unless otherwise noted.