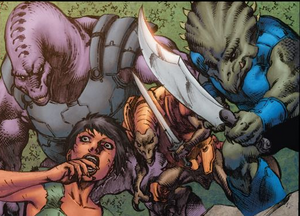 The "Dino-Men" (more correctly referred to as Dino-Women) were a species of sapient dinosaurs originating from an alternate dimension.

The term Dino-Men was a moniker given to them by the Victorian era explorers that discovered their dimension. In actuality the Dino-Men are all female and resemble anthropomorphic dinosaurs of various species.

The immortal War-Monger was lured into the realm of the Dino-Men as a means of not only imprisonment but also to deal with the Dino-Men threat to Earth. However though it took her centuries to escape the Dino-Men's realm she used her powers of conflict aggression to cause the species to wipe themselves out.

Retrieved from "https://aliens.fandom.com/wiki/Dino-Man?oldid=159046"
Community content is available under CC-BY-SA unless otherwise noted.