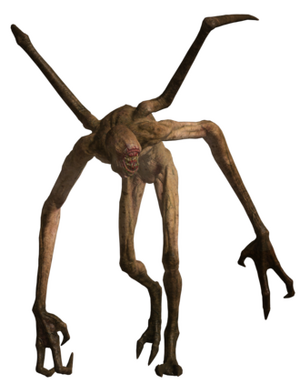 Hunter from Beyond (possibly)

The Horror in the Museum

The Dimensional Shamblers are a presumably extradimensional species of physically-grotesque beings.

Little is known about this species, except that they are large, black-colored and exceedingly alien-looking, appearing to combine simian and insectoid traits. Their heads are rugose, and their forepaws are equipped with talons.

Despite their name strongly implying an extradimensional origin, it is known that these are still material creatures, whose hides can be preserved after death. The sight of a deceased specimen can be extremely unnerving, and George Rogers believed that "the mere sight of it alive, or even the full-fledged thought of it" could instantly kill someone with fright.

Retrieved from "https://aliens.fandom.com/wiki/Dimensional_Shambler?oldid=184921"
Community content is available under CC-BY-SA unless otherwise noted.