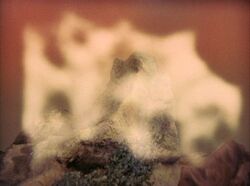 Capable of operating both in space and planetary atmospheres

Capable of traveling at faster-than-light speed

Star Trek
The Dikironium Cloud Creature is a mysterious species of intelligent gaseous predators capable of traveling in space and moving from planet to planet at faster-than-light speed by using gravitational fields.

Like a vampire, this creature drains its victims of blood, feeding off the iron inside the blood cells. It's also known for its ability to alter its own atomic composition and to move out of synchrony in time.

The Cloud Creature is made of dikironium: an element previously believed not to occur naturally. However, it somehow has the ability to change its atomic composition into other elements and fool starship sensors. It is also capable of manipulating time and gravity to some extent, which allows it to travel through space at faster-than-light speed by using gravitational fields. While doing this, the creature seemingly exists in what has been described as "a borderline state between matter and energy".

The Dikironium Cloud Creature can displace itself in time (described by Spock as "throw[ing] itself out of time sync"); which allows it to evade weapons such as phasers by relocating somewhere else while the shot is being fired. This same ability also makes deflector shields useless against this creature.

Only one individual of this species has been observed, which has been encountered on the planet Tycho IV in 2257, and Argus X in 2268. In spite of its chemical camouflage, the Cloud Creature can be identified by a distinctive strong fragrance it emits, reminiscent of honey.

This creature is believed to be intelligent, although it hasn't been observed to communicate, and seems to view Humans as mere prey. It feeds by draining victims of their blood cells, leaving pale bloodless corpses behind, with no marks of perforation or other wounds. Since the creature requires iron, it will not feed on species with copper-based blood, such as Vulcans.

It's believed that the Dikironium Cloud Creature reproduces by fragmentary fission; giving birth to thousands of offspring. Since the Cloud Creature found on Tycho IV and Argus X was killed in an antimatter explosion set by the USS Enterprise crew, it's not known how many of them (if any) are left in the galaxy.