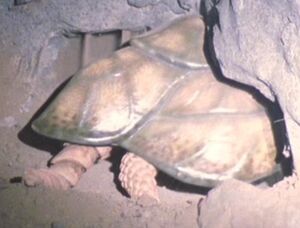 The Diggers are non-sapient creatures which inhabit the complex underground cave systems of planet Terra Nova. They appear to be harmless quadrupeds with a scaly tail and a turtle-like shell protecting their bodies. Diggers are hunted by the Novans, an underground offshoot of the Human race, which had established a colony on Terra Nova in the late 21st century.

Retrieved from "https://aliens.fandom.com/wiki/Digger_(Star_Trek)?oldid=180719"
Community content is available under CC-BY-SA unless otherwise noted.