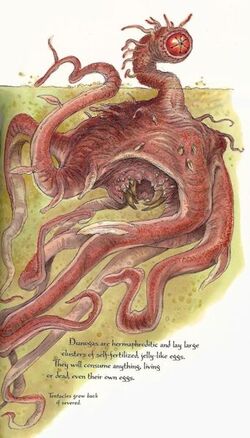 They can grow up to ten meters in length, though most grow only to five or six meters. They are able to blend into their surroundings by diverting small portions of digested food into a series of ducts underneath the creatures' skin. Dianogas favor warm, watery environments, although they are able to survive radical shifts in temperature including boiling, and are also impervious to pollution. These creatures will eat anything, dead or alive, including their own eggs. They are also known to prey on Humans. Dianogas reproduce asexually and lay large clusters of self-fertilized eggs with a jelly-like consistency.

Dianogas are native to the planet Vodran, where they would later migrate to other planets by stowing away on garbage ships in their microscopic larval form. Due to their indiscriminate appetites, they are used by many species in sewage treatment. Because of this, they are often called "garbage squids" or "sewage squids".

Dianogas are also known to cause major problems when their populations become too large. Smaller specimens have even been known to crawl out of toilets and attack startled residents. Despite this, they have their uses; by eating organic waste, they allow metals and other materials to be gathered and recycled.