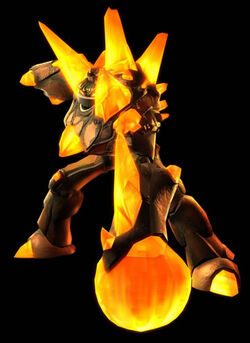 Metroid
The Diamonts were a species of silicon-based rock-people who hailed from Mondreus. For some reason they have disappeared from the galaxy. The bounty hunter known as Spire is believed to be the last of their race.

Diamonts are able to naturally transform into rocky spheres called Dialanches, which they use to bound around quickly as well as defend against their foes. While their diet is unknown, it can be easily presumed to be some form of mineral consumption due to their silicon-based biochemistry. With this in mind, it's extremely unlikely that they could consume living food to sustain themselves.

Diamonts can and will transform into Dialanches when the need arises, which resemble large, rolling volcanic rocks. These alternate forms can attack by throwing out and rotating its sides around itself rapidly, revealing the spiky yellow core. As its appearance hints at, it maneuvers like a boulder; while at high speed its movements are a little bouncy and rough, it gains momentum quickly and handles with ease.

Dialanches can cling to walls, which it can then climb slowly. This climbing ability is not perfect, of course, in that it does have a tendency to fall off often (perhaps due to its own massive weight), and Dialanches will automatically detach from a wall when it chooses to attack an opponent, which is often used by Diamonts as an effective ambush tactic. Another setback to the Dialanche form is that it is incapable of climbing vertical surfaces, and a Diamont will not drop itself from the surface unless there is a platform or floor for it to safely land upon.