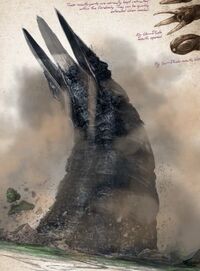 The Dholes, a.k.a. Bholes, are a race of huge, viscous, burrowing creatures which can be found on the planet Yaddith, in a quintuple star system within another galaxy.

In the distant past, they represented a constant threat to the dominant species of the planet, the advanced Yaddithians. Thousands of years before the advent of the Human race on Earth, the Dholes had successfully took over, turning Yaddith into a "dead world" where they could rule unchallenged.

Dholes can also be found in the Vale of Pnath within the Earth's Dreamlands, where it's said that they hide so persistently in the darkness that no one has ever seen one, and that they're only known for the rustling sound they make and the slimy trails they leave in the mountains, where they hunt for prey.

Retrieved from "https://aliens.fandom.com/wiki/Dhole?oldid=189010"
Community content is available under CC-BY-SA unless otherwise noted.