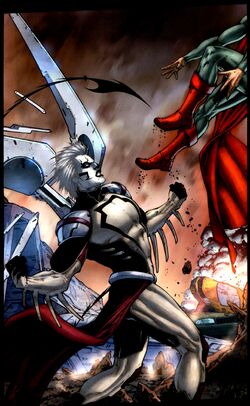 DC
Dheronians are a humanoid race hailing from the planet Dheron, a planet within the same system as Krypton.

They are distinguishable from Human by their white skin, eyes, hair (with a small black streak), black nails, lips, and markings around their eyes and on their cheeks and nose. Also seem to have black thin tails.

Once outside their star system, Dheronians develop new abilities determined by the frequency of each new sun's light and internal radiation. White stars and dwarf stars, blue stars and yellow suns all give them different properties. Pulsars and quasars give them "power beyond imagining", though it is unknown exactly what these powers are.

Dheronians are the dominant and only known species of Dheron. They evolved at similar rates to Kryptonians, but theirs was the harder path. Their planetary climate was more difficult, and their natural resources were fewer. Regardless, their population grew and prospered. They and the Kryptonians both developed limited-range space flight at roughly the same time. Every twenty years, the distance between Krypton and Dheron's respective orbits was usually great enough to preclude travel and contact between the two species. The Dheronians waged war with Krypton every twenty years for all the things Krypton had that Dheron did not. The Kryptonians did the same for the few things Dheron had that Krypton did not. As a means of leverage, the Dheronians ensured that the Krypyonians never advanced far enough in their own efforts at star travel to gain the advantage in battle. The Kryptonians later did the same to them, killing many Dheronian young in the process. Dheron was later visited by a mysterious race of beings who offered a proposition. Two years later, under the mysterious man's guidance, they launched a series of probes to penetrate miles into Krypton's fiery core. They chose deserted areas where the damage would not be immediately noticed and used the mystery race's advanced technology to avoid detection. The probes created an energy field that prevented heat from dissipating upward. Over time, the heat built up to the point where Krypton became unstable, causing the core to become unstable and explode.

Retrieved from "https://aliens.fandom.com/wiki/Dheronian?oldid=178175"
Community content is available under CC-BY-SA unless otherwise noted.