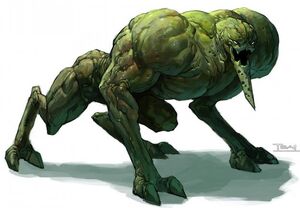 Devourers are carnivores twisted by the dark side of the Force and are indigenous to Dxun.

Exar Kun was attacked by a devourer while trying to enter the tomb of Freedon Nadd, but killed the beast. Two devourers later ate Mandalore the Indomitable after he crashed on Dxun, leaving only his mask, which was found by Mandalore the Ultimate.

Retrieved from "https://aliens.fandom.com/wiki/Devourer_(Star_Wars)?oldid=197428"
Community content is available under CC-BY-SA unless otherwise noted.