Alien Species
Register
Don't have an account?
Sign In
Advertisement
in: Ben 10 Universe, Sapient Species, Races of the Milky Way Galaxy,
and 9 more 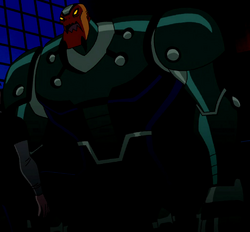 Ben 10
Detrovites are a species from the planet Vulcan.

Detrovites are large muscular humanoids with orange skin, yellow eyes, teeth merged with their lips and two horns on their jaw.

Detrovites are extremely durable, as they are completely unfazed by a Pyronite's fire blasts and a Petrosapien's diamond shard projectiles.

Detrovites are a weather-resistant species, as Vulcan is 850 degrees "on a cold day". Despite that, Vulkanus is able to survive in the temperatures found on Earth.

Detrovites can breathe underwater and survive in the vacuum of space.

Powerful explosions can reduce a Detrovite to only their heads.

Detrovites can be immobilized by ice, such as an Evolved Necrofriggian's ice flames.

Ancient Detrovites used energy manipulation tools to break down their food. Some of those implements are older than Earth's solar system.

Detrovites can create a great navigational system, one of which existing within the Proto-TRUK. 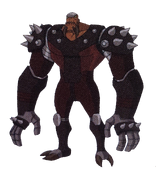 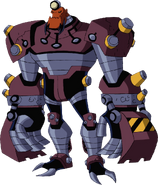 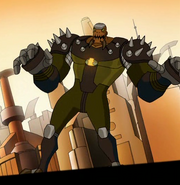