Dessgeegas (also known as Desgeegas) are a species of thermophilic arthropoidic organisms indigenous to the regions of the rogue planet Zebes known as Norfair. They move through crab-walking as well as strong jumping, and are likely related to the Sidehoppers, another indigenous species. They seem to prefer to inhabit Ridley's Lair, although whether this indicates that they are in fact tampered-with organisms or just have infiltrated the location is unknown. They share a similar name with that of the Geega species, although if they are related is unknown.

Dessgeega show the uncanny ability to defy gravity and jump from and fall back to a ceiling, a trait also found in Sidehoppers. However, they are also covered in intensely strong exoskeletal plates and sharp slikes, making them even deadlier and more resilient foes. Like Sidehoppers, they are found in giant sizes as well; this too could indicate genetic tampering, but evidence to support this is minor; instead they may be the matured adults of the species. The fact that both they and their Sidehopper relatives possess this leads credence to this latter hypothesis.

With the destruction of the planet Zebes, Dessgeega were assumed extinct. However, Dessgeega were also found aboard the Biologic Space Laboratory Research Station, indicating that specimens were removed off-world. This therefore indicates that they are in fact simply extinct in the wild, although if these two places were the only two places they were held (which seems unlikely), then they would in fact be entirely extinct now. They are also found aboard the Bottle Ship colony where they also have the ability to spit webs to trap prey.

There was at least one sapient Dessgeega known to exist, likely having been made that way by Space Pirate or Chozo genetic tampering. This Dessgeega, 'Big Time' Brannigan, worked alongside the Mother Brain, but was known to have been a bounty hunter long before this.

When the BSL was infested with the X Parasites, the Dessgeega aboard the vessel within the tropical Sector 2 "TRO" were overtaken and altered by the X; the Dessgeega-X have lowered their armored protection for reasons unknown, although they are now capable of firing the bodily spikes as darts to help take down opponents. 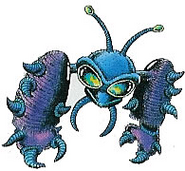 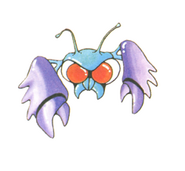 A adult Dessgeega goes after Samus Aran aboard the Bottle Ship colony.
Community content is available under CC-BY-SA unless otherwise noted.
Advertisement