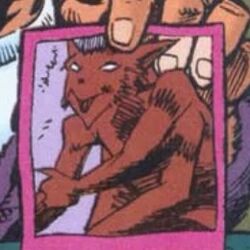 Douglas Adams
The Dentrassis are a sapient alien species which are employed as catering staff on the Vogon's long haul fleets. They've been described as "an unruly tribe of gourmands" and "a wild but pleasant bunch". Ford Prefect says that they are "the best cooks and the best drink mixers" and also that "they don't give a wet slap about anything else".

Despite working for the Vogons because they love being paid in Vogon currency, the Dentrassis hate the Vogons themselves and will always jump at the opportunity to annoy them, such as by helping hitchhikers on board Vogon spacecraft, which the Vogons despise, and serving sub-standard food to the Vogons.

Retrieved from "https://aliens.fandom.com/wiki/Dentrassi?oldid=198058"
Community content is available under CC-BY-SA unless otherwise noted.