Alien Species
Register
Don't have an account?
Sign In
Advertisement
in: Aliens on Earth, Affiliations, Extradimensional Species,
and 8 more 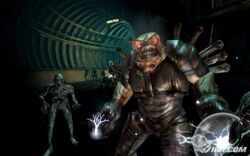 Hellgate
Demons are a combination of races from various worlds that have been assimilated by the legions of Hell. They are split into four castes.

Beasts are the lower forms of life in Hell. They are the naturally occurring fauna of the Underworld, made evil by their surroundings and their masters. True Demons see them as fodder to subjugate, abuse, brand, armor and train for battle. Beasts are unintelligent and commonly oriented towards melee combat, attacking with fangs and claws. While susceptible to most types of damage, Beasts of greater power and age can be extremely large and strong, a few reportedly towering over city buildings. Some of these creatures also employ attacks representative of their infernal origins, unleashing corrosive, poisonous or fiery effects on their unlucky targets. In terms of natural defenses, the more brutish varieties have thick, armored hides while their smaller, wiry kin rely on their agility to avoid attacks.

This caste includes both the undead and the demons that create and command them. Necros often swarm in semi-organized packs, using strength of numbers to overcome the limitations of their commonly weakened and decayed forms. Although usually simple to knock down, some may rise again unless appropriate measures are taken. Their masters are more powerful, and eliminating their commanding presence should be of the highest priority when encountering them. Creatures within the Necros caste commonly use attacks that pierce the flesh, poison the blood and corrupt the soul.

These are semi-corporeal beings with powerful magical abilities at their disposal. They exist, at least partially, on an alternate and parallel realm of existence known as the Spectral plane, making them difficult to fight using normal physical means. Spectral demons are visually the strangest and most shocking creatures encountered by the survivors of the Burn, and some even have hidden forms that can only be seen by adventurers with a means to peer into their unearthly realm. Their Spectral power sometimes manifests itself in our world as a form of electricity, and attacks based in similar energy spectrums have been found to be highly effective.

Also called True Demons, these are the organized beings that command the lesser castes and are the primary cause of the apocalypse. Mostly humanoid in form, they often use weapons and equipment in their vile pursuits, and some have even been seen using human-created technology, although they tend to favor devices of their own fabrication. Their intelligence, use of weaponry, and the ability to attack from both range or in hand-to-hand combat make them a dangerous and unpredictable enemy. Demons also wear armor that is commonly resistant to traditionally infernal types of damage, such as fire and employ mystic shields to safeguard them against more temporal forms of damage.

The Burn is a post-apocalyptic event in the year 2020 A.D. in which the alternate dimension known as Hell opens a gate on earth and begins to invade the world. It is unknown if the event is contained to the planet, or if the whole dimension of rage and destruction is spilling into ours.

Little is known about hell, but what can be seen from The Burn, nothing is immune to its corruption. Lands blister, air becomes rancid and poisonous, the lucky creatures and plants die. The ones that don't die will be found by demons before their deaths, having their souls eaten while still alive. The still living humans and animals, undead to some, live in a state of eternal pain of the tearing of their soul.

The only things that can survive once it is completed will be the demons, minions of its destruction. No trace of anything living will remain when Hell has overtaken this little patch of order. Once The Burn is done, the last remnants of humanity will have no chance of survival, as no area that can feed a sufficient population will survive.