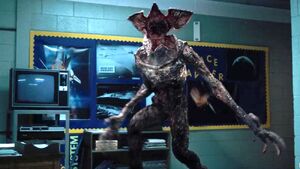 detection of blood from Earth, travel through tears between worlds, impregnate humans with larvae

The Demogorgon is a grotesque creature from a parallel dimension known as the Upside Down.

The Demogorgon is mostly humanoid in stature and body shape but with thin, fleshy skin with bones visible. Some body parts, such as the arms, legs, fingers, etc. is more elongated, making it appear taller than a normal human. One of the more noticeable aspects of the Demogorgon is its massive gaping mouth with circular rows of teeth and several jaws that, when together, resemble the shape of a butterfly or flower.

Even though the Demogorgon was a major antagonist in season one of Stranger Things, it's origin remains mostly unknown because of the single Demogorgon being the only one present. Despite its method of reproduction being impregnating human hosts with slug-like larvae, the larvae turn into demodogs than demogorgons. The demodogs do have a lot of similarities with the Demogorgon such as the mouth and skin, but are more quadrupedal than their biped counterpart. There is a possibility that the demodogs are an earlier stage in the life cycle of the Demogorgon, but there currently isn't enough canon information to dictate that being the case.

Retrieved from "https://aliens.fandom.com/wiki/Demogorgon?oldid=181312"
Community content is available under CC-BY-SA unless otherwise noted.