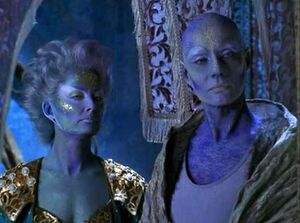 Blue with light-green or yellow highlights

Delvians are a species of roughly the same height and proportions as the average humanoid. However, instead of being a form of fauna, Delvians are actually floral organisms, with their main characteristic being blue skin with light green patterns. Their lifespan exceeds centuries and they are known to have psychic abilities.

It is not known whether Delvians photosynthesize like regular Earth-based plants, but they are known to consume other vegetation, and on rare occasions meat. The sun, however, does have a pleasurable effect on their body. Known as a photogasm, it can only be speculated that these produce similar effects to orgasms upon the body, but without the need for sexual contact or provocation.

Delvians have no bones. Instead, their skeletal system consists of fibrous tissues akin to cartilage. According to Zotoh Zhaan, they also have "tuperadinous cellulose tissue and regenerative fascia membrane"; and their bluish coloration results from "chloroplast tintation", with yellow highlights being "stomata for the transpiration of water". They've also demonstrated the capacity to blend in when surrounded by foliage, essentially becoming invisible.

Retrieved from "https://aliens.fandom.com/wiki/Delvian?oldid=156404"
Community content is available under CC-BY-SA unless otherwise noted.